While the attention is often focused on the gender pay gap (which averages 13% in the EU), the EU Care Atlas brings to light the more worrisome and complex picture of women’s economic inequalities. The pay gap is just one of the three main elements that explain the overall earnings gap, which is estimated at 36.7%. In other words, women in the EU earn on average only two-thirds of what men earn in a year.


Ahead of International Women’s Day, the Foundation for European Progressive Studies (FEPS) and the Friedrich-Ebert-Stiftung (FES) launch the EU Care Atlas, a new interactive data map to help uncover what the statistics are often hiding: how care deficits directly feed into the gender earnings gap and contribute to gender inequalities.

According to Eurostat, the gender pay gap has dropped from 14.1% to 13% in 2020, but this does not necessarily translate into a decrease in the economic inequality affecting European women. The EU Care Atlas illustrates how the pay gap is just one of the components of the overall earnings gap (the difference between what men and women earn annually).

Besides the pay gap, the EU Care Atlas looks also at the employment and hours gaps and provides a picture of unpaid work across Europe.

Behind all these indicators lie the disproportionate burden of care work carried by women - paid and unpaid. The EU Care Atlas illustrates the urgent need to look beyond the mere gender pay, by showing the full picture of gender economic inequalities and their interplay with care imbalances.

While many factors, such as low pay in feminised sectors, determine the overall earnings gap between genders, three major factors explain the gender earnings gap: 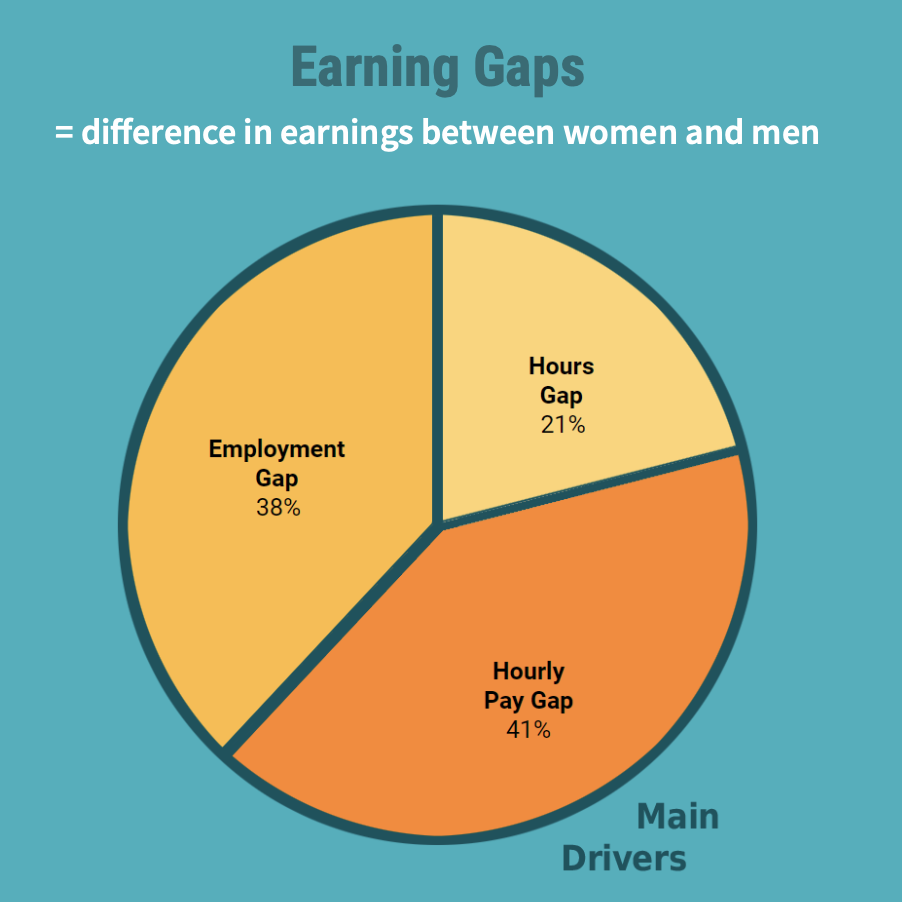 - The gender pay gap (13% EU average) is the difference in average gross hourly earnings between women and men. It accounts for less than half of the total earnings gap between genders (41%).

- The gender hours gap (16.5 pp) is the difference between part-time employment for women (24%) and men (7.5%) in EU-27. This gap represents 21% of the overall earnings gap. Part-time work is inextricably linked to care, as women often cut hours in paid work to make time for unpaid care work.

Browse through the map to grasp the differences between these gaps and across countries.

The Covid-19 global pandemic and the ageing of the European population are undeniably proving that we all depend on care. Despite its vital contribution to the well-being of any society, care work remains highly undervalued.

Due to persisting patriarchal norms, women still bear the disproportionate burden of care work, whether paid or unpaid. The consequence of such norms results in their overrepresentation in poorly paid care sectors and in the working ‘double shifts’ taking over the unpaid care work at home after their daytime job. Data on time use shows that they work even more than men, however with a more significant share of their working time spent on unpaid care work.

“The care crisis constitutes one of the main challenges for rebuilding Europe's post-pandemic future. In light of the gender inequalities illustrated by the EU Care Atlas, we welcome the upcoming EU Care Strategy by the European Commission”, says FEPS Secretary General László Andor.

“The pandemic has underlined the relevance of care for the wellbeing and functioning of our societies. But two years have passed, and still, we see no action or meaningful reforms. The Next Generation EU recovery package defines minimum shares for digital and green spending, but no requirements for much-needed social reforms. To achieve a truly equal society, we need a care transition alongside the green and digital transitions.” says Renate Tenbusch, Director of the FES EU Office.

The EU Care Atlas is part of the #Care4Care project, by the Foundation for European Progressive Studies (FEPS) and the Friedrich-Ebert-Stiftung (FES), which over the last two years has developed a care framework supporting the EU gender equality strategy.