The Foundation for European Progressive Studies (FEPS), the Renner Institut and the Austrian Chamber of Labour (AK) started their collaboration on a research project entitled 'A fiscally sustainable public investment initiative in Europe to prevent climate collapse' in 2019. 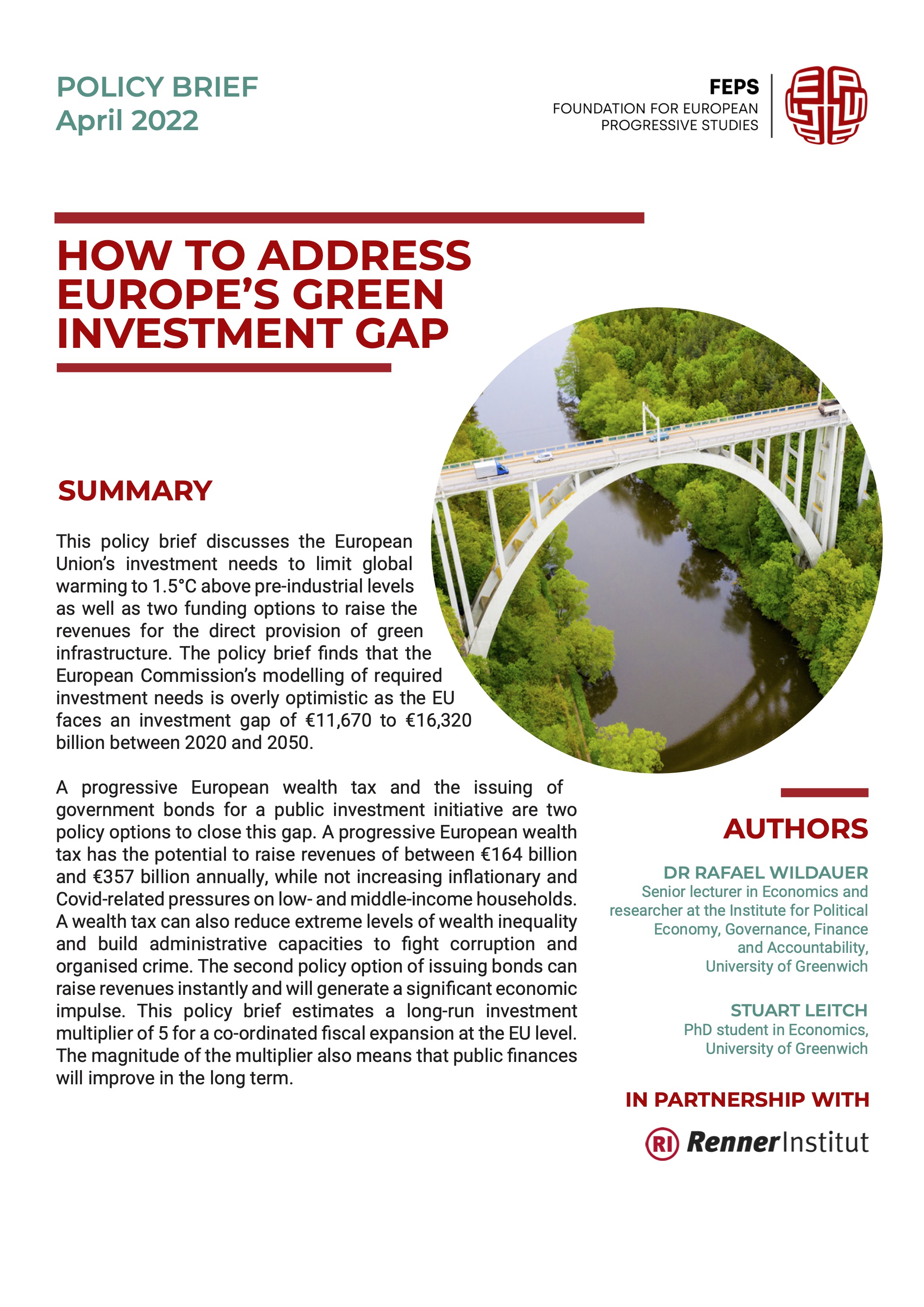 Combining the results from the three previous policy studies on climate investment, the brief discusses the European Union’s investment needs to limit global warming to 1.5°C above pre-industrial levels and two funding options to raise the revenues needed.

The analysis concludes that the European Commission’s modelling of required investment needs is overly optimistic as the EU faces an investment gap of €11,670 to €16,320 billion between 2020 and 2050. To close this investment gap two funding options are explored. The first is a progressive European Wealth Tax targeted at the richest 1% of European households. The second is a large-scale public investment initiative for green infrastructure funded by issuing government bonds. 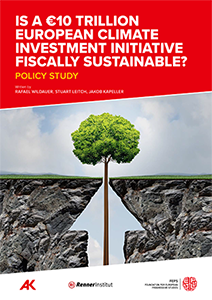 The private sector's poor track record for providing the required scale of financing for this infrastructure and the limited time left make it necessary to assess strategies that do not primarily rely on slowly changing price signals or the private sector's own initiative.

To shed light on these matters, this Policy Study estimates semi-structural vector autoregression (VAR) models for the EU27. These are used to study the impact of permanent - as well as 5 years long - public investment programmes. 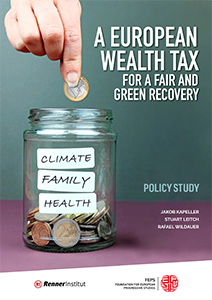 The study demonstrated that a European net wealth tax has the potential to make a substantial contribution to the EU’s efforts to organise a decisive response to the twin crises of Covid-19 and climate change.

Moreover, it would provide a means to reduce historically high levels of wealth inequality in Europe. 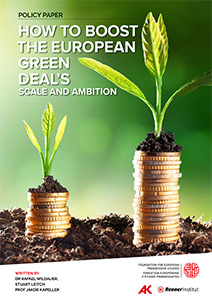 Author: Jakob Kapeller, Rafael Wildauer, Stuart Leitch
The first part of the project analysed the Commission’s 2050 and European Green Deal roadmap and assessed whether the outlined measures represent a plausible strategy to meet the key Paris Agreement target. This yielded a comparison of the roadmap with the requirements suggested by the scientific evidence:

We estimate that in order to fulfil the commitment to limit global warming to 1.5°C above pre-industrial levels, the European Union would need to invest between 12,000 and 16,000 billion [euros] in green infrastructure over the next 30 years», says Rafael Wildauer (University of Greenwich), commenting on the Policy Brief he co-authored on Europe's green investment gap.

In this video, Dr. Wildauer presents two policy options that could help us bridge the gap.

#1 European and National Development Banks for the Green Transition

Professor Stephany Griffith-Jones, Financial Markets Director, Initiative for Policy Dialogue at Columbia University presented FEPS Policy Study "The Role of the EIB in the Green Transformation". She explored the European Investment Bank (EIB)'s double mandate to maximize sustainable and inclusive development impacts while maintaining some financial profits or avoiding financial losses in the context of the major green transformation.

Rafael Wildauer and Stuart Leitch, University of Greenwich, presented FEPS Policy Study "A European wealth tax for a fair and green recovery"  in partnership with the Renner Institut, where they investigated the potential of a European net wealth tax to raise substantial revenues while supporting the economy and the consensus on climate action

Jos Delbeke, Professor at KU Leuven and at the EUI School of Transnational Governance and former Director-General of the European Commission's DG Climate Action, gave a presentation on the carbon border adjustment mechanism and the ETS reform. A discussion with MEP Aurore Lalucq and a Q&A followed.

#3 The role of central banks in the climate transition

What role can central banks play in the transition towards a climate-neutral economy? Several discussions are ongoing, and FEPS debated this crucial issue with Irene Heemskerk, Head of the European Central Bank's new Climate Change Centre.

The presentation was followed by two short interventions from Jens van’t Klooster, postdoctoral fellow at the KU Leuven and Julia Symon, Senior Research and Advocacy Officer, from Finance Watch, who acted as discussants.

#4 Sustainable Finance and the Issue of Greenwashing

Martin Spolc, Head of the Sustainable Finance Unit at the European Commission’s Directorate General for Financial Stability, Financial Services and Capital Markets Union, discussed with us how the EU’s sustainable finance framework can address greenwashing.